BMEM Fic: Shadows of the Past II

I’ve been working my way through the alphabet of prompts Dawn gave us on the first day. D is for discovery, and in particular Smeagol’s discovery of the ring. Just how would that day by the river change things for him and those he was closest to? 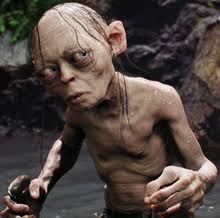 Shadows of the Past II

Sméagol had half stumbled, half fell into the smial’s entryway, that day everything changed. His grandmother Golde only quirked an eyebrow, her lips twitching in a half-suppressed grin, but Halga dropped her knitting-needles, rushing over toward him.

Her beloved was clearly unnerved and out of breath, and he’d lost his cloak and torn his britches, but was that the worst of it? She quickly surveyed his arms, leg, chest, head – he seemed hale enough. “What have you got yourself into?” she asked in mock-exasperation as she closed the smial door he’d left open.

Sméagol opened his mouth to answer but no words came out. Halga kneeled before him, pushing the rain-drenched curls fallen in front of his face aside so she could see him clearly. Behind them, a cane dragged across the stone floor of the entryway, and Halga knew her mistress had come Golde had set her needlepoint aside and come to investigate the commotion. “What have you got into?” she asked, not unkindly but with more authority than Halga had managed.

Still he stayed silent, opening and closing his mouth with no words coming out, like a carp caught out of water and gasping for breath. Halga reached out and took one of Sméagol’s hands between her own, rubbing it to warm it. His eyes were wide with fright, the pupils grown so large she could barely see the white around him. Perhaps he would do better with a simpler question, and really, there was one thing they really needed to know. “Sméagol,” she said as she looked him straight in the eye, “Sméagol, love – where is Déagol?”

He shook his head for a moment, as if he could not quite bear to say it, but then Golde reached over with her cane, tilting his head back so he had to look her in the eye. “I lost him,” he said, swallowing hard. Then the words came more easily. “We were fishing down by the stream and – and the storm came on us, of a sudden. We ran for home, but wild dogs came upon us near the rose-brambles, so I ran as hard as I could and didn’t look back.” Golde let her cane fall back, and Sméagol turned his chin. “I do not know where he is, but I didn’t think I could find him without help, with dusk coming on.”

“You chose aright, child,” she said, this time more gently. “Déagol can climb with the best of them, and he like as not just found himself a good tree and is waiting to be found. We’ll see to him. You should go and draw yourself a bath. It will be time for your birthday dinner soon enough, and you could do with a long soak, after your fright.” Then, turning to Halga, she nodded down the corridor leaning back into the smial. “Go and fetch his uncles, and bring torches.”

Sméagol’s uncles had hunted for hours, but they never found so much as a hair off Déagol’s head. In fact, the only sign of any kind they had found was Déagol’s cloak, ripped nearly to shreds by some wild thing and found too near the river to fit neatly with Sméagol’s account. Though, who knew just where the dogs might have driven him?

Halga had sat in his family’s quarters all that night, holding his hand and running her fingers through Sméagol’s hair to soothe him. His cousin Bede – Déagol’s brother, little more than a wisp of a child – had cried for hours that night, but Sméagol had hardly shed a tear. Looking back, Halga realized she should have thought that odd. That, and other things as well.

One day, maybe a week after Déagol’s disappearance, she’d gathered up the clothes Sméagol had left scattered around his room. Sméagol had been sitting by the fire, lost within himself it seemed, but when he saw her he jumped up and viciously grabbed for the waistcoat, scratching her arm so badly that he drew blood. She’d grabbed at her arms, dropping the rest of the clothes and glared at him angrily. She saw him turning the garment inside out, searching frantically, and then the flash of a gold ring as slipped it into his pocket.

At last he had looked over at her, his face equal parts relief and regret. “Did I hurt you?” he’d asked her, as though her scratched arm was the only pain at issue.

“Aye,” she said, “but you worried me more. What were you after?” A thought occurred to her, then: perhaps whatever he’d left in that waistcoat was a gift for her – a betrothal ring, even? He was nearly out of his tweens and old enough to think of taking a wife. “Sméagol,” she asked, “is that ring for me?”

But no.  His face quickly had twisted into panic and he’d pawed at his pocket, as if trying to reassure himself the ring was still there. “It was – it came to me.” He had run his finger over it several times before seemingly realizing how oddly he was acting, and he grasped at his trouser-legs to stop himself. “It was a – a birthday present,” he said after a moment. “From Déagol. It came to me, he gave it to me, as a special birthday present. By the river, before the storm I mean. I think it must have been Grandmother’s, once, but he gave it to me. A last gift, before – ” And Sméagol, who had never cried since he first stumbled into the smial that dreadful afternoon, then he had let a single tear roll down his cheek. He relaxed his hands at his side and gave Halga a faint smile. “It is precious to me. But I didn’t mean to hurt you.”

Sméagol had never once raised his voice to her, nor to anyone else so far as she knew. Grief was one thing, but this?

At times she caught a glimpse of the Sméagol she’d once knew. At midsummer he’d hooked his arm around hers and they’d danced the bransle with the rest of the hall, and Halga almost felt herself around him. That Yule he’d presented her with a bracelet he’d made from the remnants of a bird’s nest, and a betrothal ring as well.  That moment had so overwhelmed her, she’d lifted him off his feet and whirled him about in the air before remembering it was usually the lad who did that, and had set him down with a laugh.

As soon as she did that, though, the weight of the moment had washed over her. Was this truly the hobbit she had fallen in love with? He’d never been one for gossip in the days before Déagol had disappeared, but these days he was always ready with a secret to share, and none of them flattering. Some of them were downright cruel, and many she couldn’t guess how she’d learned them. And then there were the gifts: a scarf of the softest lamb’s wool, and a locket, and other goods besides. She loved the tokens and the thought behind them, but she’d also heard strange whispers about similar articles gone missing from his cousins’ wardrobes. Had he bought these gifts at market, or were they pilfered goods? And how could she ask him, without betraying her suspicions?

She had once loved Sméagol, and she hoped he might find himself once again. Still, as she considered the ring on her finger, she couldn’t help remembering her mother’s words of advice when she’d first entered her tweens: that she must love the man she saw before him, not the man she hoped he might become. Slipping the ring from her finger, she placed it soberly back in Sméagol’s hand. “You are still sick with grief,” she said as gently as she could manage. “I hope that is it. But I cannot pledge myself to a life with you, as you are now. Will you ask me again in six months’ time?”

He drew in his breath so sharply it sounded almost like a hiss, and he had slipped away through the crowd all about them. Halga had run after him, but he was nowhere to be found. She looked for him all that night but with no luck. When she finally went back to her room at the night’s end she found the silver ring she’d refused that night, broken in half and laid out like a gift on her bureau.

That sent a chill all through her, and she was truly glad when six months passed between them and Sméagol did not approach her again. When Golde asked after the locket she sometimes wore, saying it reminded her of one she’d owned as a lass and could no longer find. Halga had half-expected the question and confessed her suspicions without regret. And when they found the small treasures secreted away in his room and turned him out of the smial, a part of Halga felt more at peace than she had in years.

Yet she could not help wondering what had become of him, and whether she might have saved him, if she’d said yes. She knew in her heart of hearts she’d done the only thing she could. And she loved her life now, the husband she’d met at the harvest dance two years after Sméagol had been driven out and the family they’d built together. She could hardly regret that life. And yet, and yet.

Years later, when she found the quiet grove of trees by the river, the ground that had been dug up and trampled over, surrounded by the daises, she was not wholly surprised. She recognized those flowers as the ones her Sméagol had favored, and she knew somehow that Déagol lay here – dead, and buried more properly than any wild dogs could have managed. His blood cried out to her from the ground, and the tears Sméagol had never shed for him slid down her cheeks to the cursed earth. And Sméagol? Her Sméagol – was he a murderer? No; she could not bear that thought. She would think of him as well as she could, for she could bear no less. Whatever had happened beside this river so long ago, whatever darkness had seized her beloved, Déagol was not the only one to die that day.

If that hope was a lie, it was a good one to believe. Pulling her shawl tight around her (against the wind, she told herself), Halga started back toward home.