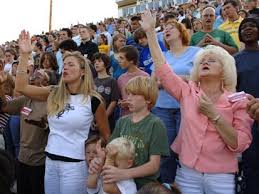 Over at her blog, Rachel Held Evans is getting ready for a panel discussion she’s doing on the future of evangelicalism. As part of that, she asked her readers to discuss whether they see themselves as evangelicals and what that word means to them. It’s an interesting question so I thought I’d lay out my own answers. My inner platonist demands I mix up the ordering, since we can’t relate to concepts until we understand them, but I don’t think that’s a huge deal.

If you want to help her out, please do visit the link above. I’m sure she’d love any thoughts you might have. I’d like to know, too, so do feel free to answer them in the comments here (though I’m not going to assume she’ll read this blog!) And of course I’d love your thoughts on my own answers, if you have any.

2. How would you define evangelicalism?

That’s the million-dollar question, isn’t it?

I think at a broad level it’s defined by a focus on evangelizing, reaching out to people who aren’t yet in the Christian fold, perhaps including people who evangelicals don’t consider “real Christians.” This means they need a boundary between the orthodox and the heterodox, and tend to treat Christian identity as an either/or situation: you meet certain conditions, believe certain things or agree to certain things, and at that point you’re a Christian. Because Christians (rightly!) aren’t happy with the idea that we “earn” our salvation because of the things they do, evangelicals in practice point to certain things you must believe. It’s not that the belief saves us so much as that the belief is proof that we are saved. That means that evangelicalism is usually about getting people to agree to certain beliefs, like the existence of God, the historical truth of the Christmas and Easter stories, the reality of sin and hell, the depravity of humans, and similar things.

As part of that package, evangelicals usually believe, if you don’t agree to the right beliefs, that’s a one-way ticket to eternal torture. Some believe that some people are “called” (the predestination model) whereas others talk about salvation being open to everyone. But in either case, our salvation can’t be the kind of thing that’s contingent on anything we do, including being educated enough to know the finer points of Christian history, theology, and dead languages. Those points that are essential, the things that Christians need to believe, also have to be fairly obvious. This leads evangelicals to focus on the “plain meaning” of Scripture. They also tend to be distrustful of denominations and church hierarchies for a similar reason: if something is truly essential, God should be able to speak to the believer directly.

For me, evangelicalism is more about an approach to religion and life than a certain set of beliefs. Many mainline Protestant Christians would agree with most of those beliefs I listed above, but they believe it with a different focus. First, evangelicalism draws a sharp distinction between the Christian and the non-Christian, whereas MLPs are more comfortable with the idea there’s some fluidity here. The belief in hell and the focus on salvation raises the stakes on believing other things the right way, even things that seem more like “gatekeeper” issues, totems that help establish your evangelical identity like having the right position on homosexuality, abortion, and Israel. In a certain sense, the evangelical position is actually the more consistent way to act if you truly believe what many MLPs claim. I mean, if you truly believed that praying a certain prayer or believing certain things was the only thing standing between your kids, your parents, your best friends and eternal torment, making sure they were on the right side of that issue would probably be the most important thing you could do. It would be loving. But it also would shape the relationship in a very different way (IMO a worse way) than if this wasn’t the focus of your relationships.

This makes it sound like all Christians can be evangelicals. I know that modern evangelicalism comes out of a specific historical context embedded in the Protestant tradition, and that from this angle evangelicals are really Protestants who reject higher criticism. And on some level this is true. You have evangelical Catholics and Mormons and other groups, but mainly that’s because politics has led to people with very different histories becoming strange bedfellows and being “grafted in” to that history. In practical terms, I’m not sure how much all this matters, though. For me, evangelicalism is more about the approach and the way that influences things like our approach to injustice, our relationships, and just being educated about theological claims than it is about history.

2. Do you identify yourself as an evangelical? Why or why not? How do you feel about religious labels in general?

I’ve tried to be evenhanded above, but I really don’t care for evangelicalism. This doesn’t mean I’m biased against individual evangelicals. I do think that in the long run other approaches to Christianity are more helpful for developing a better kind of faith, at least for me, but I also know individual evangelicals who I respect quite a bit. But in practice, the evangelicalism I’ve encountered in my life simply isn’t for me, because I’m one of those brainiacs who has a hard time flourishing if she turns her brain off. I have a respect for expertise both when it comes to theology and philosophy as well as empirical areas of life like medicine, psychology, sociology and other areas. In my experience, evangelicalism negates the importance of things like this unless it agrees with what you already believes.

If psychology tells us that homosexual identity isn’t something we can reject if we choose to, any belief system should make sense of that when it talks about sexuality. Christian evangelicals often look no further than the standard interpretation of the Bible (which is not to say it’s the only or even the best one), and if psychology doesn’t support the conclusions they draw from it they’ll use that as a basis for rejecting the psychology. Or, if an economist tells us that modern society requires certain investment in infrastructure and planning at a high level for the economy to flourish but you interpret the Bible as saying each family should see to its own affairs, that economist will most likely be dismissed in favor of what the evangelical believes the Bible says. This methodology has always struck me as backwards and a bit dangerous.

But I’m also a MLP because I like tradition. There’s something about the way I think that does well in what I call a narrative – a sequence of people struggling with the same issues, building on and reacting to what they say. It’s part of what draws me to philosophy. Rather than trying to start from scratch on (for example) what it means to be free, I’ll take Robert Nozick’s account of freedom and look at it seriously, figure out where I agree with it and disagree with it and try to fine-tune it further. And it works that way with religion, too. Instead of reading the Bible on my own, I do better when I look at what Origen said about Biblical questions, or John Calvin, or Augustine, or… you get the idea. That means I actually find religious labels very healthy, when used rightly. And I definitely want to tap into a tradition, a liturgy and a theology that goes beyond what I can think of on my own. So I’m not rejecting evangelicalism because I don’t want to be boxed in. If anything, evangelicalism is just a little too boundariless for me, at least in some way.

Btw, I’m not mentioning the political and equality issues a lot of people associate with evangelicalism. I disagree with them in a big way, but I also don’t think evangelicals have to take positions like this. In fact, the way evangelicals work with Jim Wallis to address poverty, immigration, climate change and even gun violence makes me hopeful. Being evangelical doesn’t have to mean being a member of the Religious Right, so I’m trying not to conflate the two.

I think I’ve laid out some of my biggest concerns above. I won’t go through those one more time because it this point it feels like I’m beating up on evangelicalism a little, and I don’t want to do that. It’s definitely not for me and I think the way it’s usually practiced, there’s definitely room for improvement. But I also know lots of evangelicals who seem to really thrive in this approach to Christianity. It’s not like I just want evangelicalism to go away.

So what about my hopes? For one thing, I’m genuinely encouraged to see some evangelicals questioning the ways they’ve been told to read the Bible. Steve Chalke is Exhibit A. An influential UK evangelist (I heard him called England’s answer to Billy Graham more than once), he basically came to the conclusion after reading the Bible that the church should find a way to support monogamous, same-sex couples. It’s not just that he and I agree; it’s that he was able to read the Bible as an evangelical without concluding that the conclusions other evangelicals had reached on this question had to be true. You’re seeming more of this, with figures like Rob Bell, Brian McLaren, and even Rachel Held Evans herself being in a grey area. Are they evangelical, or aren’t they? Many evangelicals, both the big names and rank-and-file, are recognizing that you can read the Bible faithfully, even in the commonsense way favored by evangelicalism, without necessarily agreeing on every point of interpretation. It’s leading to a more complex and (IMO) accurate way of thinking about Christianity for them.

I also mentioned folks like the Sojourners crowd, where many evangelicals are questioning the “value voters” set of issues and positions. They’re even finding common cause with non-evangelicals and non-Christians on issues that are important to them. This is good, and not just because I like the positions they’re coming around to. It trains people to work with folks who aren’t their ideological clones. And that can only help evangelicalism (and the rest of Christianity) in the long run.

Finally, I hope evangelicals will join up with MLPs more than they have. I don’t mean this has to be the end of evangelical Christianity as such; they could do this by being able to absorb MLPs in dying denominations, or they could join up more with those traditional denominations and think of themselves as evangelical Presbyterians or Methodists much as we have evangelical Catholics today. Evangelical Christianity has a lot to offer in terms of passion and outreach and hospitality, done right. MLP would benefit from an infusion of that spirit, frankly. But I think evangelicals would also benefit from being around people who worship with their head and not just with their heart. We’d also do well to surround ourselves with people who don’t believe exactly the same way we do. There’s a biblical model for this in 1 Cor 12, where Paul tells the church that we are one body made of many roles. I see major potential for a symbiotic relationship between evangelicals and MLPs, though I think it will take a paradigm shift to get there. We need to see someone can be different from us in important ways and still have value, even maybe be able to help me. But then that’s not a bad change to make.

4.     Do you know what Roger Olson’s favorite candy is? Because I think I’m going to owe him one for compensating for my lack of expertise on this.

One could do worse…