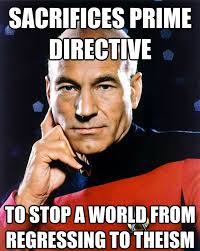 I spent a good part of today watching Star Trek: Voyager episodes online. The last two from season two both deal with religion but in really very different ways. As far as good story-telling and science fiction goes, neither episode is really all that good. But they do provide some interesting insight into how Trek handles religion. Both depart from the standard “religion is backward superstition people must put aside to become enlightened” view that characterizes TOS, TNG, and large parts of the other series.

The first, “False Profits”, is about the two Ferengi from TNG’s “The Price” who travel through a wormhole and get stranded in the Delta Quadrant. The Ferengi then crash-landed on a planet and conned the locals into thinking they were the gods prophesied about in that people’s mythology. Of course, the gallant Federation steps in to stop the Ferengi who are using the indigenous peoples’ religious beliefs to collect tributes. They’re mucking around with these peoples’ development and getting rich on their backs to boot. The Federation first try to take the Ferengis off the planet forcibly but then realize they can’t do that (it would be too traumatic for the people to be abandoned by their gods) and eventually settle on playing out a certain prophecy, where the gods would leave on their own.

On the one hand, this episode is every bit as insulting to religion as some from TOS and TNG when mythology was treated as superstition that the best members of even backwards alien societies eventually gave up. “False Profits” takes a step forward by treating religion as an important part of the aliens’ society that you can’t just rip away without their being some bad consequences. It does treat literal readings of religion as a kind of backward idea, and one that left them vulnerable to manipulators like the Ferengi. Interestingly, Janeway + Co. have their own push against literalism at one point: they have to do some creative reading of the prime directive to allow themselves to get involved in the situation. I definitely agree with their decision to stop the Ferengi, but I can easily imagine Starfleet Command quirking an eyebrow or two over Janeway’s reasoning here.

“Sacred Ground” gave a much more positive view of religion. In this episode, the crew are visiting a culture that pretty well resembles the separation of church and state model most American liberals are all for. In an effort to figure out just what happened (the monks refuse to let them scan the area of the temple with their technology), Janeway goes through a ritual that will allow her to petition the gods on Kes’s behalf. Her real reason is less spiritual – she’s heard that the monks can survive the energy field after going through the ritual, and she’s convinced there must be some biochemical change the monks don’t wholly understand which may provide the key to healing Kes. Janeway even carries a scanning device implanted under her skin, and the ship records all the changes going on in her body. The doctor ultimately devises a treatment that should work but doesn’t, and the captain returns to the planet where she really begins to accept the idea that maybe it’s not biochemical changes she needs to save Kes. In an act of blind faith she and Kes both go back into the energy field, and Kes is healed. (Janeway herself is unharmed.)

This episode deals with some fairly complicated metaphysical issues, particularly near the end. It denies explicitly that the gods are things she can encounter, and at one point some visions Janeway encounters as part of the ritual (she supposes they are the gods, though they deny it) point out that if she could understand everything, what would there be left to believe in? They point out how logical she is, how much she seems to like rigorous truths like she finds in mathematics – but one of those visions call her reliance on science even when it fails her a kind of faith. At the end of the episode, the doctor gives a thoroughly scientific explanation of how Kes was healed and Janeway survived, and Janeway gets this far-off look in her eye. When the Doctor asks if she disagrees with his analysis she says it’s very scientific. You get the impression that there’s nothing *wrong* with it, but Janeway now thinks it’s incomplete somehow, even though the physical facts add up to a complete explanation.

As far as storytelling goes, I’m not a huge fan of this episode. It seemed a bit rote – even the first time I saw it, I knew pretty much what was going to happen. But philosophically it’s probably one of the most pro-spirituality episodes in the entire Star Trek corpus, at least that I can think of. Even in Deep Space Nine, which is easily the most explicitly religious of the series, the prophets were treated as distinct entities. They’re not physical entities and don’t experience linear time, and they’re incredibly powerful. But at root they’re really not that different from flesh-and-blood beings. They’re just a part of the cosmos, and they have a causative role to play in things. “Sacred Ground” is different somehow. The rituals Janeway goes through aren’t part of the normal explanatory frmaework science is driving at. Even if science can give a complete description on what happens on a molecular level, Janeway seems to intuit that there’s still something missing. Like the relationship between religion and the secular government, spirituality is separate from science here, but still worthwhile.

In a way it’s similar to the philosophical problem of free will – basically, if the laws of physics were set up in a way that, given certain starting conditions you’d always have certain outcomes, what possible role free will could have to play. If this view of physics is correct, and if free will is at all “real,” it can’t be about choosing to do one thing or another – you can no more choose one course of action over another, than you could will a bullet to stop traveling once you’ve fired a gun. So free will, if it’s anything at all, has to be about something other than choosing between several possibilities. (On this view of the world, there is no choice to be made.) Similarly, as I watched this episode it seemed to be saying that God, if He is any kind of God at all, cannot be just another part of the cosmos but has to be something else altogether.

I do wish the producers would have played out this line of thought more, because it seems like it could be an intriguing one. Maybe it didn’t make for great TV, but it’s certainly an interesting way to approach some philosophy of religion concepts.