some quick thoughts on Santa Claus 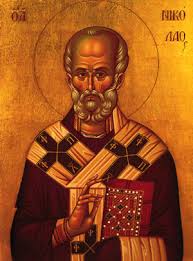 Just a thought as we get into Christmas proper:

The original St. Nick was a 3rd century orphan from Turkey. Actually a Lycia, but from the area that would become Turkey. His most famous act of generosity was to anonymously give away a good portion of his inheritance to save three sisters from sexual slavery. As Adam English recently pointed out, he wasn’t an ascetic like St. Anthony of Egypt who lived for years in the desert and only ate the occasional morsel of bread. He was a comparatively rich man for his time. But he gave generously when he saw people in need.

And he punched Arius in the face at the Council of Nicea. Arius just sat there saying what Nicholas considered a lie, and he got so enraged he physically assaulted the guy. It was the fourth-century version of Wittgenstein’s poker. As much as I hate physical violence, and as much of a closet Arian as I am in some regards, that’s actually pretty awesome. Peter Enns over at Patheos recently called him a beast, and I think he’s pretty well spot on there. “Mother Teresa, Oskar Schindler, and Samuel L. Jackson all rolled into one.” I can dig it.

I’m thinking about this because I bought some pairs of fuzzy socks for some kids in my building. I’m baking spice cookies and giving a few small gifts and chocolates to some kids I know in the neighborhood, in honor of Nikolaustag, a major holiday in Germany and the Netherlands. What I love so much about the historical St. Nicholas is he seems to strike the balance between the consumeristic orgy you see in America and the proper place of generosity and gift-giving. Also that he didn’t go around bragging about his generosity – he just saw a need and used the wealth at his disposal to meet it. I have my qualms about charity and the kinds of injustice that make charity necessary always make me a littl squeakish about praising the generous too much. Still, when I think about folks who are doing charity right, St. Nicholas is at the top of the list.

Also, that he punched a man in the face over doctrine. Because even a pacifist like me thinks that’s pretty awesome.